This short story is based on my first novel, WIE DU MIR (German for: Tit for Tat), which was published in 2011. The novel is set in early 90s Belfast and tells the story of IRA member Dally Ferguson who spares the life of his target, policeman Will McCrea. But during the very same botched assassination, Will’s young wife tragically dies, leaving Will reeling with pain and anger. He asks his secret police friend Hugh to do whatever it takes to bring Dally, the alleged killer of his wife, to justice. His call for revenge sets off events that quickly escalate beyond Will’s control, ending in a man-hunt with catastrophic consequences.

“Cigarette Break” is kind of a prologue to the novel. 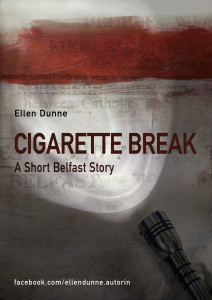 This website uses cookies to improve your experience while you navigate through the website. Out of these, the cookies that are categorized as necessary are stored on your browser as they are essential for the working of basic functionalities of the website. We also use third-party cookies that help us analyze and understand how you use this website. These cookies will be stored in your browser only with your consent. You also have the option to opt-out of these cookies. But opting out of some of these cookies may affect your browsing experience.
Necessary immer aktiv
Necessary cookies are absolutely essential for the website to function properly. This category only includes cookies that ensures basic functionalities and security features of the website. These cookies do not store any personal information.
Non-necessary
Any cookies that may not be particularly necessary for the website to function and is used specifically to collect user personal data via analytics, ads, other embedded contents are termed as non-necessary cookies. It is mandatory to procure user consent prior to running these cookies on your website.
SPEICHERN & AKZEPTIEREN
Nach oben scrollen